A conversation with PJ Daley 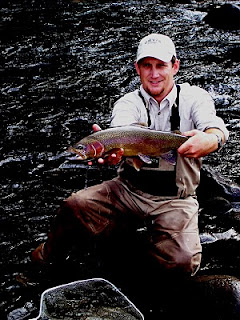 PJ Daley is the head guide and manager of the Orvis store at the Wisp Resort up in Western Maryland.

PJ, tell me about how you came to run the Orvis shop at Wisp?

I actually fell into the position. At the time, I had just moved back to Garrett County and was looking for permanent work. As luck would have it, I have been friends with a few of the guys that are managers at Wisp for a long time. They knew that I'd had a fly rod in my hands since I was five or six years old, so when Wisp decided they were going to start a fly fishing program, they recruited me for the position.

We both guide up in Garrett County, what do you think makes this area so special?

It's hard for me to nail down just one thing that makes the area so special. I think that first, you have to give credit to the Maryland Department of Natural Resources for the way our trout fisheries are managed. There are opportunities for all types of angling, but they put a heavy emphasis on managing streams and rivers for very high quality fishing for both wild and holdover trout.

What this means is that on most of our best streams, catch and release, trophy, and delayed harvest regulations are in effect. There are also some areas that are open to fly fishing only. MD DNR also recognizes the need for put and take angling, so many streams are stocked regularly with trout so that people can catch a few for dinner.

One other thing that really stands out to me are two of what I consider to be world class tail water fisheries in the North Branch of the Potomac and the Savage River.

The lower Savage is managed under Trophy regulations and has fantastic hatches all summer long. The North Branch is known primarily for one thing - Big trout.

Do you have a favorite time of year to fish?

My favorite time of the year to fish is mid April through mid June. I have different rivers I like to fish at slightly different times in spring. I like the Yough and upper Savage in April for the caddis hatch and again in late May for the green drakes.

My favorite time though, would have to be mid-summer on the lower Savage fishing terrestrials, sulphurs, and yellow sallies to wild browns and brookies.

Break some of the water in this area down for me, how should an angler approach the Yough, the Savage, the North Branch of the Potomac, or the Castleman?

I fish the Yough mostly in mid April through about June 1st. It gets a tremendous caddis hatch (aka mother’s day caddis) mid April. You'll also see many of the major mayfly hatches you expect on trout water like quill gordons, hendricksons and march browns.

The action climaxes with the green drake hatch sometime in the last ten days or so of May. You can expect much of the same for the upper Savage and Casselman.

When there aren't any hatches present, your standard bead head nymphs and wooly buggers will produce. One note, I would definitely recommend not fishing the Casselman on a weekend. The easy access from the interstate brings in crowds.

On the lower Savage, come with a box of blue and red quills in April. I usually don't fish it to much until the April and May crowds have thinned out and the water levels have dropped and warmed up slightly in early June. This is when it gets fun. Caddis and pmd's start it off.

By July you're going to start seeing lots of yellow sallies, blue wing olives’, brown stoneflies, midges, and terrestrials. Unless you are a diehard nympher, there is no need to throw anything but a parachute adams, yellow sally, or black ant. The fish in the lower Savage are gluttens for a dry.

Fishing the river correctly and getting a dead drift is another thing altogether and is where a good guide is invaluable. Presentation is everything here. I love guiding on the lower Savage mid-summer.

The North Branch is more of a nymphers paradise than the lower Savage. It's not blessed with the great hatches that a lot of our other waters have, but I still fish a lot of dries because that's what I like to fish best.

There is the upper North Branch which falls under delayed harvest reg's and the lower North Branch which has both catch and release as well as put and take reg's. Sporadic hatches of midges, caddis, stoneflies, and various mayflies will still keep the dry fly guys busy, but the biggest fish usually fall to nymphs. I run lots of float trips on it because of the very difficult wading.

Unless you are an extremely agile wader, a wading staff is a must on the Yough, lower Savage and lower North Branch.

What are some of the must have flies for this area?

Are there some smaller streams you also like to fish?

We are fortunate to have great brook trout fishing in the area. Bear creek, Big Run, Poplar Lick, and Monroe Run are all good, and with the exception of Bear creek, they are catch and release for brook trout, artificial only regs.

For Bear Creek I always wait until the put and take anglers have long gone. Usually by late May you will have it all to yourself. There are quite a few other streams in the county that offer tremendous brook trout angling and a few that even have wild rainbow and brown trout populations. You'll have to do a little map homework and exploration to find these. Where would all the fun be if I told you everything?

You have guided for years, what are some of the ways you think anglers can improve their success on the water?

I don't tie up until I get to the stream. I take a seat on a rock, and try to figure out what's happening before I start casting. Master the art of fishing pocket water. This goes hand in hand with what I call K.I.S.S., or keep it short stupid.

On our more technical streams like the lower Savage which has a very steep gradient, unless you're fishing a pool, there aren't a whole lot of situations where you need to lay out long casts. Get close to where the fish are and keep your line off the water by high sticking. This way you can control your fly and achieve a dead drift. You'll be amazed at how quickly you start catching fish on the lower Savage if you can do this. I can tell people this all day long in the shop, but until they have me take them out and see it for themselves, they don't usually have great results.

Relax! Most people miss fish because they set the hook to aggressively. Relax and pick the rod tip up almost lazily. Just lift and stay firmly connected to the fish.

If you are just pricking fish and not getting solid hookups, your hook is dull. Check it on your thumbnail. If it doesn't stick with very light pressure, it's not sharp enough.

When you get a day off from either the shop or the river, where do you like to fish?

Thanks PJ, see you on the river.
Posted by John Bilotta at 2:39 PM